Please read Part I and Part II for an introduction. Part III extends the treatment to other dollar indices. Part IV looked at an ensemble model from our learnings from Part III.

In this final part of our series on training a simple Support Vector Machine on currency indices to predict the NIFTY, we will incorporate a Simple Moving Average into our decision matrix. While our model in Part IV would go long/long-short based purely on the predictions of the SVM, the model we use here will go long only if both the prediction is positive and the NIFTY is above a 50-day SMA and go short only if both the prediction is negative and the NIFTY is below its 50-day SMA. Think of the SMA as a regime signifier. The SVM that is only based on DTWEXM (LS2) give better returns than the one based on the ensemble model (LS.) However, the ensemble model had a slightly lower drawdown of the two. Also, when compared to the earlier version that did not use the SMA, LS2 under-performs by about 10%. However, the key difference is in the drawdowns. Using the SMA filter reduced drawdowns significantly, especially the one occurring in 2018.

An SVM with a 4th degree polynomial over the DTWEXM currency index in conjunction with a 50-day SMA seems to be the winning combination.

Please read Part I and Part II for an introduction. Part III extends the treatment to other dollar indices.

Here are the cumulative returns of the standalone models and the ensemble: The standalone model over DTWEXM (LS2) seems to outperform all other models, including buy and hold. However, the ensemble model (LS) has lower drawdowns and comes in at second place. Here are the list of drawdowns deeper than 5% over the test dataset:

In the next (and final) post, we will explore if we can add a simple technical signal into to mix to boost returns and reduce drawdowns.

Please read Part I and Part II for an introduction.

To recap, The FRED publishes the following indices along with USDINR (DEXINUS):

We modeled DTWEXM in Parts I and II. Here, we model the rest. Given the results above, we can ignore DTWEXO going forward. Surprisingly, DEXINUS (USDINR) does not predict the 2018 correction. In fact, the DEXINUS model using the 2005-2018 dataset replicates buy&hold. Hence, we will ignore DEXINUS as well. The SVM modeled on the 2005-2008 dataset using DTWEXB with degrees 5, 6 and 8 seem to have side-stepped the 2016 and 2018 corrections. Furthermore, degree 8 seems to have produced the best cumulative returns on the test set. Please read Part I for an introduction.

Earlier, we saw that a 3rd degree polynomial kernel produced the best results on the test set. In this post, we explore if we can we get better results by tuning the degree parameter.

We find that there is no single degree parameter between the two datasets (#2 above) that consistently outperforms. Here are the cumulative return charts for the best performing parameter:
2000-2018 dataset (8) In the next post, we will train a polynomial SVM with the other dollar indices (DTWEXB and DTWEXO) and USDINR (DEXINUS) and tabulate their predicted returns over different degrees.

Code and charts for this post are on github.

This series of posts pulls together two things we observed in our previous posts:

Here, we use a Support Vector Machine (SVM) to train a model on the returns between the DTWEXM index (Trade Weighted U.S. Dollar Index: Major Currencies) and the NIFTY 50.

We find that an SVM using a 3rd degree (the default) polynomial kernel gives the “best” results. We use the SVM thus trained to predict next week NIFTY returns and construct long-only and long-short portfolios. There are some points of concern. For one, the model is heavily long-biased. Even when the actual returns were negative, the predicted values was mostly positive: Second, the model has tracked the buy&hold NIFTY since the beginning of 2018. The narrative has been that the rise in oil prices caused the CAD to blow out that caused investors to pull out investments that caused the rupee and NIFTY to fall (whew!) Either USDINR moved independently of DTWEXM or the relationship between DTWEXM and NIFTY 50 broke down. It looks like its the former: 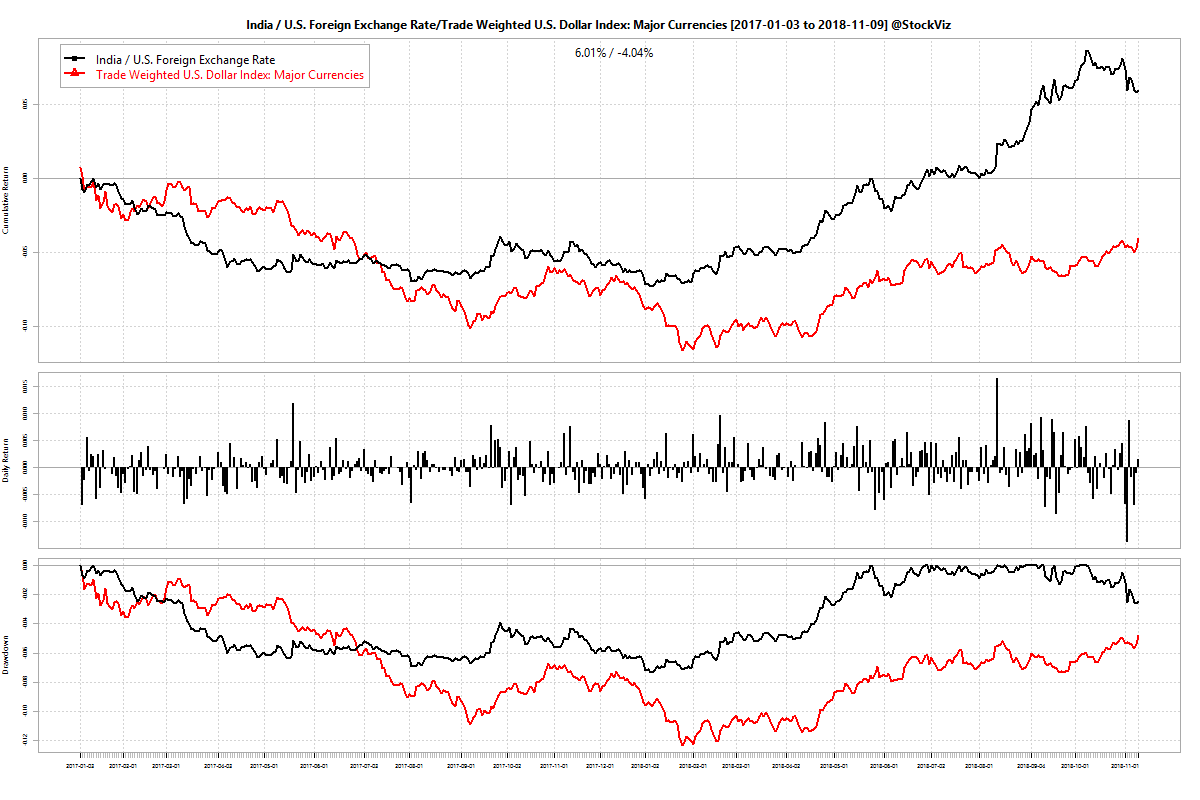 Third, the cumulative returns seem to have been majorly influenced by small set of predictions that cut a drawdown that occurred in July-2015 by half. We notice a similar effect on the smaller dataset (2005 through 2018): See how a small branch in Nov-2016 lead to the superior returns of the model predicted portfolios.

In the next part, we will fiddle around with the degree of the polynomial used in the kernel to see if it leads to better returns. Subsequent posts will cover the use of the other dollar indices (DTWEXB and DTWEXO) and finally USDINR (DEXINUS) itself.

Code and charts for this post are on github