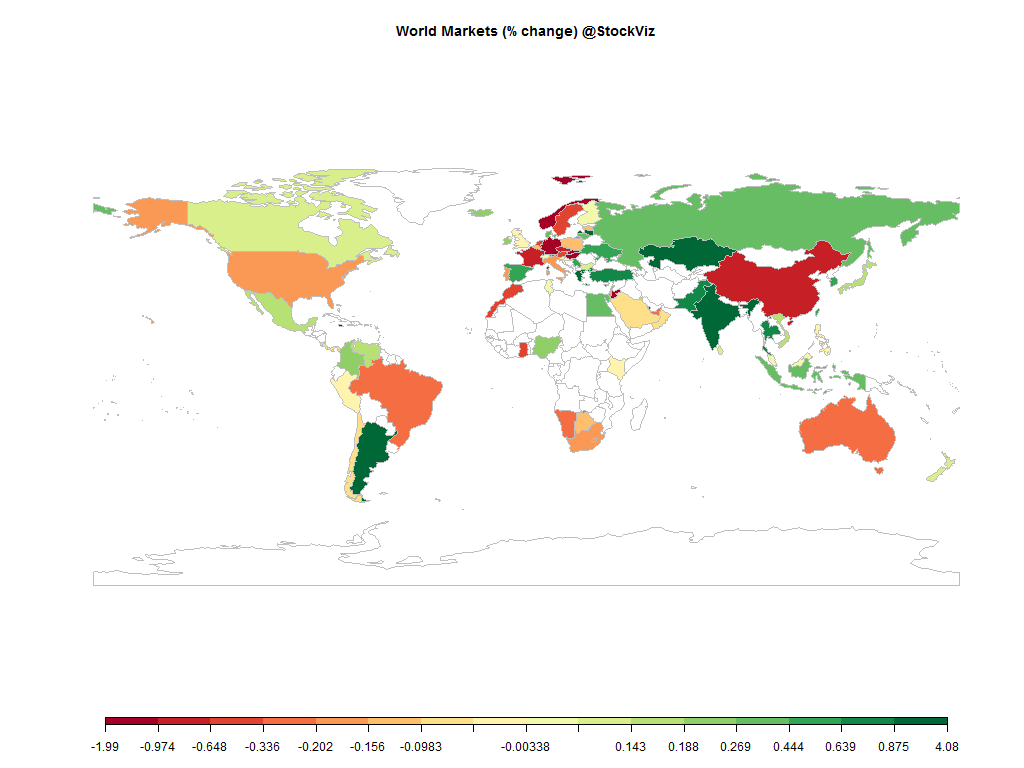 NKY is up a smidgen this morning after the SPX ended more or less flat last night. Credit indices show “risk on” with Asian investment grade credit spread contracting -4.43%

KFA owes Rs.7,500 crore to banks. Back in February last year, bankers publicly stated they had lost faith in the management’s ability to revive the company. Now they are thinking of issuing a willful defaulter notice to the airlines. (LiveMint) [stockquote]KFA[/stockquote]

Brace yourself for a flood of OFS from PSUs. Jaitley: “…If they (Sebi) say 25 per cent (minimum public holding) that will be a different set of guideline. If any PSU wants to avoid that it has to get itself delisted… If a PSU decides to get listed, then it is bound by the listing law.” (ET) Related: PSUs have always been a money-loser (Public Sector vs. MNCs)

Lavazza, which bought the café brand Barista in 2007, has sold the coffee shop chain with over 190 cafes to Carnation Hospitality. (DC)

The Reserve Bank of India continues tightening: key lending rate increased to 7.75% from 7.5%. Indian economy is stuck in a stagflationary rut. If India wants to get out of this rut the Government and the RBI have to work together. New Delhi needs to open its economy more and lower government spending which is pushing up interest rates and demand, economists said. The central government also needs to help encourage investment in the country’s overburdened supply chains, roads, ports and power plants which exacerbate inflation by adding to costs of delivery and production. (WSJ)

The cash-strapped Indian government is forcing oil companies to share an increasingly higher burden of subsidies in order to keep its deficit in check. The government will likely shift part of its fuel-subsidy burden off-budget, moving it to the balance sheets of the oil companies by once again under-compensating these firms. Taking advantage of its use of cash-basis rather than accrual-basis accounting, the government is also likely to postpone some payments to oil companies to FY2014-15, thus flattering the FY2013-14 expenditure figures. (FT)

Vodafone has officially requested approval to assume full ownership of its Indian unit, Vodafone India. The carrier is offering $1.7B to buy out minority holders, valuing Vodafone India at nearly $11B. (Bloomberg)

Five years of money printing have failed to produce inflation and the global economy has proved itself quite resilient amidst one political crisis after another. “Gold really doesn’t have much to offer. People are seeing better opportunities, whether that be in bonds or equities.” (WSJ) [stockquote]GOLDBEES[/stockquote]

MCX-SX is open for trading! It will trade more than 1,100 equities, develop derivatives like futures and options and launch its own index of leading shares, the SX-40. (FT, ET)

Can this even happen?  Dividend payments of at least Rs 530 crore are lying unclaimed by with the country’s top-50 blue-chip companies. (ET)

Sovereign wealth fund GIC of Singapore has cornered shares worth Rs 1,000 crore in NTPC divestment in which foreign funds bought almost 45% of shares put on sale. Indian Government holding is down to 75%. (ET) [stockquote]NTPC[/stockquote]

Robert Shiller: investing in housing is a “fad” and not a great historical investment. Key takeaway: It takes maintenance, it depreciates, it goes out of style, there’s technical progress so new ones are better. (PragCap)

Today’s pick is [stockquote]PFIZER[/stockquote]. The stock has been range-bound between the 1100 to 1350 levels since last December. The stock is currently trading close to its 52 weeks low of 1100. In the last three month period, the stock moved -10% Vs + 5% as that of Nifty’s. Oscillators RSI and CMO are at currently at 37 and -27 are hovering around the over-sold territory but are not suggesting any direction.

MACD line and the signal line are moving very close to each other since a long time and are not suggesting any trend.

The GMMA chart is not suggesting any up-move in the long term as well.

PFIZER’s average correlation of 0.40 with the Nifty is positive. The stock will not replicate the movements of Nifty closely because of the low co-efficient. [stockquote]NIFTYBEES[/stockquote]

PFIZER has a historical volatility in the range of 0.2 to 0.7. The scrip’s volatility is currently at the lowest point of the range and hence should not be a concern.

Looking at these technicals a short-term buy is suggested upon a decisive MACD cross-over. A break-out of the range in either direction will trigger a longer-term call.