We recently pulled up a chart of Indian 10 year rates to show how the interest rate curve went all bullish on Modi. But given the all around bullishness, we were curious as to how the 10-year rate differential between US Treasuries and Indian GSecs looked.

The spread compression is nowhere near all-out bullishness and may have more room to run.

The recent ISIS induced flight-to-safety notwithstanding, USDINR has tagged along the spread. 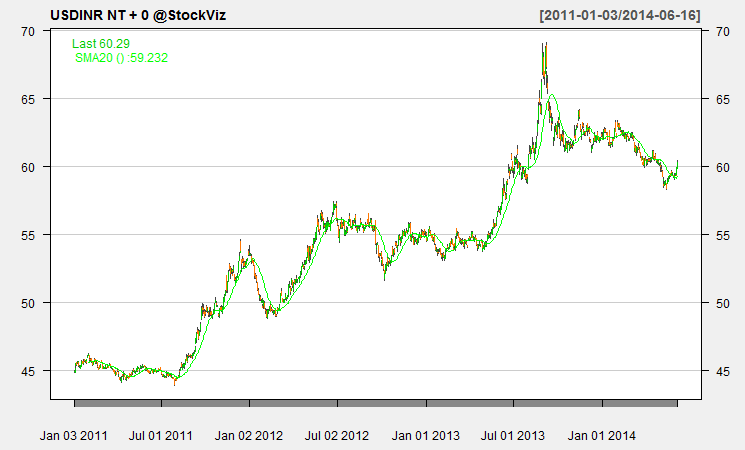 Even if ISIS ends up occupying Iraq, given that their primary source of revenue is going to be oil, they might just decide to pump more of it. Our expectation is that once we get past the current knee-jerk reaction, the above trends will reassert themselves.

It’s important to be politically agnostic and think about the potential market impact of the event. There are three sources of event risk that could cause the markets to swoon:

“My conclusion is that the so-called tail-risk are wrong and the immediate threat posed by tail-risk is lower than the market thinks.”

The Modi Rally in Bonds Charted

The 10yr yield has been a one way trade ever since the Modi effect took hold.

The curve has become flatter as well, with the 2s10s going back to 0.2 levels. 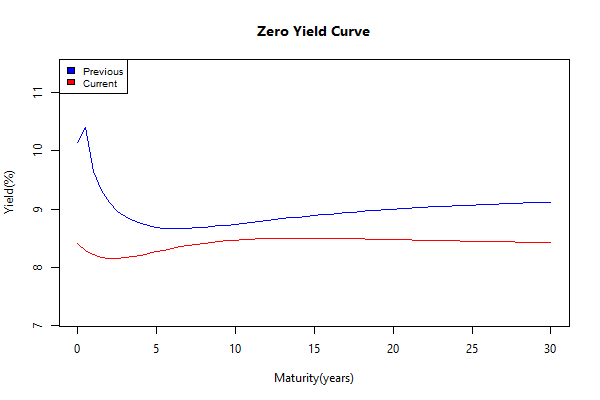 Raghuram Rajan, after having said “If you do a Volcker, you kill the supply side, and then you are in a bad situation,” seems to be itching to do a mini-Volcker.

On his arrival at the RBI, Rajan established a Trojan horse in the shape of an expert committee tasked to advise whether the central bank’s somewhat elastic growth-inflation mandate should be changed to a narrow inflation target.

The Urjit Committee came back with a recommendation that the RBI should aim to reduce headline consumer price inflation to 8% within a year, 6% within two years and 4% (+/- 2pp) thereafter.

This chart from a recent Credit Suisse report show how ridiculously difficult this is going to be:

The problem is that India is a convoluted policy mess. Food & energy account for 57% of the total CPI. We have a Minimum Support Prices (MSP) for food that have a greater impact on food & energy inflation than repo rates.

More from the Credit Suisse report:

Supply-side shocks (e.g. unusual weather patterns) and government policies are often more important drivers to the extent they impact food prices in particular. According to our analysis, if, for example, the government were to lift minimum support prices for key foodstuffs by an average of 20% at the beginning of the 2014/15 fiscal year, rather than another 6% as in 2013/14, this would more than offset the disinflationary effect of a 100bp repo rate hike.

The brain-trust at Credit Suisse expect three more 25bps repo rate hikes by the end of the 2014/15 fiscal year. If this were to occur, what would become of the banks? From FT:

If one makes sane assumptions regarding what % of the currently stressed assets of the banking system will have to written off and if one factors in incremental Basel III capital requirements over and above that, Indian banks need around US$40bn to regain Balance Sheet strength. That amounts to 2% of GDP.

Inflation targeting, without fiscal reform, and without considering the fate of banks and lacking any progress on labor reforms will brew a potentially toxic stew. Good luck to whoever wins the elections.

It was all about inflation. From the RBI press release:

Is a rate hike imminent?

Is the RBI going to surprise the market with a rate hike when it meets on July 30th? If past is prelude, then the RBI, having to deal with a lame-duck government, might just pull the trigger on this one. Consider what it did during the Asian currency crisis back in 1997/98 (courtesy Barclays):

If FII inflows don’t hold up, then they might just do this. Interesting times…