In my recent post Game Theory: Rajan vs. Government

, we saw how the ideal relationship between the central bank and the government is one where neither party gets what it wants, but there’s a stable outcome. Here are a bunch of articles that expands on the conundrum faced by a central bank.

Interest rate policy is a poor substitute for good regulation

“Monetary policy faces significant limitations as a tool to promote financial stability,” Ms. Yellen said in an event at the International Monetary Fund in Washington. “Its effects on financial vulnerabilities … are not well understood and are less direct than a regulatory or supervisory approach; in addition, efforts to promote financial stability through adjustments in interest rates would increase the volatility of inflation and employment.”

The financial markets today are nutty, but they’d be nuttier if central bankers hadn’t acted in the way they did since the collapse of Lehman Brothers.

Came across this incredible paper by Alan S. Binder, Issues in the Coordination of Monetary and Fiscal Policy, 1982 that uses game theory to explain the relationship between a country’s central bank and the government. It seemed appropriate, given that Raghuram Rajan, the RBI governor, is the same for both the UPA-2 and NDA governments, to study the options before both Rajan and the NDA in framing their relationship.

The paper was written when Regan was the President and Volcker was the chairman of the Federal Reserve. Inflation in 1980 had soared to 13.5% and Volcker had raised the federal funds rate to 20% by June 1981.

The feeling that Rajan and the government are at cross-purposes are echoed in the paper’s introduction:

Now, as often in the past, there are complaints from all quarters about the lack of coordination between monetary and fiscal policy. Indeed, the feeling that monetary and fiscal policies are acting at cross purposes is quite prevalent. This attitude, I think, reflects dissatisfaction with the current mix of expansionary fiscal policy and contractionary monetary policy, which pushes aggregate demand sideways while keeping interest rates sky high.

But how is this game played?

The game being played

The players in this game is Rajan, who sets interest rates, and the politicians, who determine the mix between government spending and tax revenues. Rajan thinks that the control of inflation is his primary responsibility and he’s anyway appointed for a fixed tenure. The politicians, on the other hand, have elections to win, which leads them to favor economic expansion over economic contraction.

The object of the game is for one player to force the other to make the unpleasant decisions. Rajan would prefer to have tax revenues exceed spending rather than to have the government suffer a budget deficit. The politicians, who worry about being elected, would prefer Rajan to keep interest rates low and the money supply ample. That policy would stimulate business activity and employment. 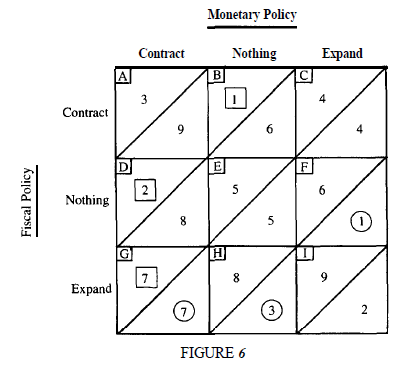 Assuming that the relationship between Rajan and the politicians is such that collaboration and coordination are impossible, the game will end in the lower left-hand corner where monetary policy is contractionary and fiscal policy is expansionary. If Rajan cannot persuade the politicians to run a budget surplus and that the politicians cannot persuade Rajan to lower interest rates, neither side has any desire to alter its preferences nor can either dare to be simply neutral. As long as Rajan is contractionary and the politicians are expansionary, both sides are making the best of a bad bargain. And this is where we were under UPA-2.

The challenge, is to shift the play to the upper right hand corner. Here, neither side is “happy”, but this is the best case scenario – things are stable. This outcome is known as a Nash Equilibrium.

Under the Nash Equilibrium the outcome, though stable, is less than optimal. Both sides would obviously prefer almost anything to this one. Yet they cannot reach a better bargain unless they drop their adversarial positions and work together on a common policy that would give each a supportive, or at least a neutral, role that would keep them from getting into each other’s way.

Will the budget provide the push to get us to the upper right hand corner? Only time will tell.

Indian markets are closed due to elections in Mumbai. Here’s a roundup of world markets and the latest flash PMI numbers.

Still below 50, but green shoots.

Production rises at fastest pace for over three years.

What can Modi do?

The following are excerpts from a recent JP Morgan special report titled “India: elections, markets & the tyranny of economic reality.”

The equity market exuberance, however, appears based on opinion polls increasingly pointing to a stable government post election, and the presumption of a dramatic economic pivot post election that jump starts a new capex cycle. 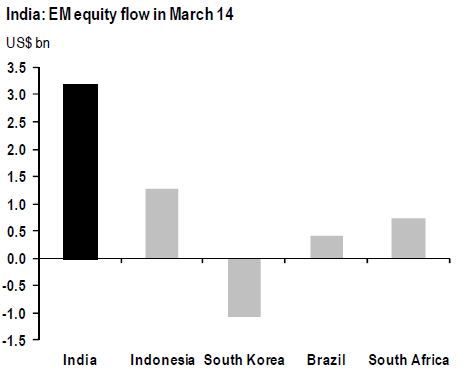 The broad hope is that a positive cycle can be unleashed if projects get unclogged, increasing cash flow for infra companies (which account for 30% of stressed loans), enabling loan repayments, and healing bank balance sheets, which can allow a fresh lending cycle to start. 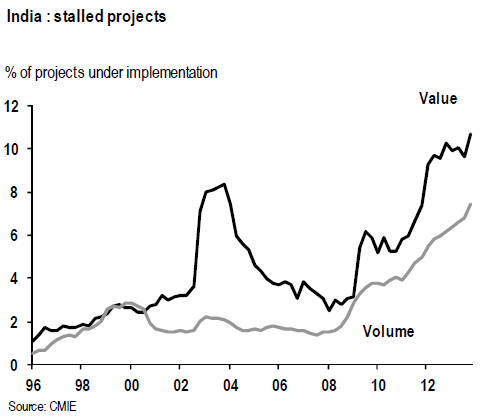 But the problem is that the vast majority of projects are currently stuck because of issues that are under the purview of state governments, over which the central government has little jurisdiction. 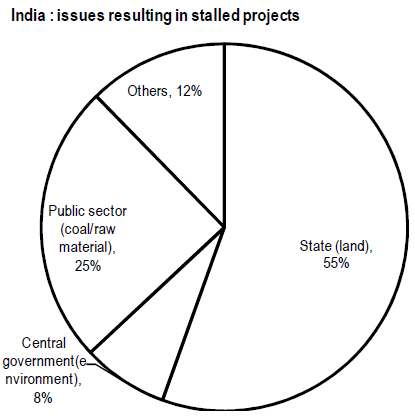 And even if these problems were magically resolved, where is the money going to come from? Among the BSE-200 non-financials, 17% have operating incomes (before depreciation, interest and taxes) that are less than the perilous threshold of 1.5 times their debt service obligations. So a significant deleveraging would need to be undertaken before these infrastructure companies have the balance sheet strength to finance another investment cycle. This is a multi-quarter process.

Banks are not in a position to lend. Public sector banks – which account for 70% of banking sector assets – are saddled with the overwhelming majority of impaired loans, and would need a significant quantum of capital injection by the government – far in excess of what has been budgeted – to finance any large pick-up in credit growth. 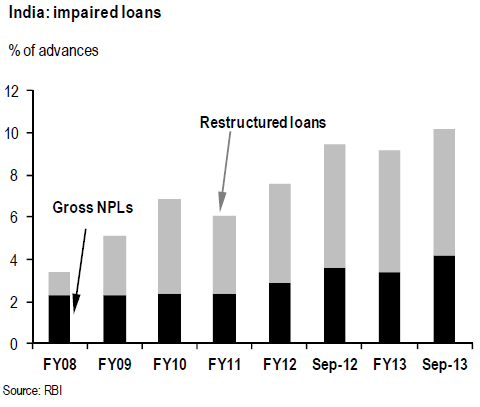 Given the economic reality on the ground, the translation from political stability to economic performance is likely to be far more lagged, incomplete and uncertain than the current market euphoria may be betraying.

Alliance Bernstein’s research shows that poorer people were generally more hopeful than the middle class about new opportunities and keen to seek better education in order to pull their families out of poverty.

Forty-something, middle income professionals frequently expressed concern about the employment market. And poorer people were typically much more upbeat about their prospects for growth. The optimism tends to reflect the scale of improvement in their lives in recent years—which has often been more pronounced for lower income households.

Is reaching lower income consumers — who have demanding tastes for quality goods at a fair price — the key to success?

Source: Beyond the Emerging Middle Class