In the book The Quants: How a New Breed of Math Whizzes Conquered Wall Street and Nearly Destroyed It (Amazon,) Scott Patterson provides a peek into the world of quantitative finance with the meltdown of 2007/2008 as a backdrop.

The book is gripping. It almost reads like a whodunit. It is like a modern-day update to Schwager’s Market Wizards series. However, I am not sure I agree with the book’s narrative that quantitative models caused and made volatility worse. In reality, an unwind of any crowded trade can trigger a doom loop of volatility. And in a margin call, the most liquid assets are the first to go. Secondly, for a book that covers statistical arbitrage, long/short value and momentum strategies and capital structure arbitrage using credit default swaps, missing Bridgewater and their risk-parity model is a big one.

Book Review: The Smartest Guys in the Room

In The Smartest Guys in the Room: The Amazing Rise and Scandalous Fall of Enron (Amazon,) Bethany McLean and Peter Elkind chronicle the rise and fall of Enron.

Before the sub-prime crisis and Lehman Brothers bankruptcy, Enron was the poster child of greed gone wild. No other company had ever committed such a massive accounting fraud. Enron’s published financial statements were completely divorced from its underlying business economics. And the system of checks and balances that were supposed to prevent such frauds were corrupted by conflicts of interest within the gatekeepers. Wall Street analysts did not dig too deep because Enron was a massive source of investment banking revenue, its auditor signed off on everything because accounting was a loss-leader for their much more lucrative consulting practice and neither Enron’s board of directors nor the rating agencies that rated its debt cared to peek under the hood.

The following passage from the book captures Enron’s mindset:

The after-the-fact rationalizations were strikingly similar to the mind-set that produced the Enron disaster in the first place. The arguments were narrow and rules-based, legalistic in the hairsplitting sense of the word. Some were even arguably true—in the way that Enron itself defined truth. The larger message was that the wealth and power enjoyed by those at the top of the heap in corporate America demand no sense of broader responsibility. To accept those arguments is to embrace the notion that ethical behavior requires nothing more than avoiding the explicitly illegal, that refusing to see the bad things happening in front of you makes you innocent, and that telling the truth is the same thing as making sure that no one can prove you lied.

In Radical Markets – Uprooting Capitalism and Democracy for a Just Society (Amazon,) the authors propose a number of “radical” ideas to fix democracy and capitalism. It is a riveting read, especially if you find the current system lacking in a number of areas.

Two ideas that stood out:

Some of the ideas around trading VCs and voting mechanisms can be implemented within smaller groups – apartment building associations, for example – right away. However, the ideas around immigration might never see the light of day. The book is worth a read even if you are not looking for radical ideas – the authors set the current problems that our systems face in their historical context.

The logical end point of institutional investment and diversification is the coordination of all capital to extract maximum wealth from consumers and workers.
A simple but Radical reform can prevent this dystopia: ban institutional investors from diversifying their holdings within industries while allowing them to diversify across industries.

In the Den of Thieves (Amazon,) author James B. Stewart provides a play-by-play of the rise and crash of Wall Street in the 80’s.

The 80’s were a beginning of a new era. The US government/administration was chock full for laissez faire free-marketers. Regan was at the helm and regulations were considered the enemy. Wall Street got punch drunk on junk bonds, leveraged buyouts, insider trading, portfolio insurance and what not. Investment bankers and traders mostly viewed the banks they worked for as a way to get rich personally – damn the “franchise.”

What really got on the SEC’s nerve was insider trading in stocks. For one, it was happening in the market they had total regulatory oversight over. And two, it was eroding the trust of retail investors in the market. So the SEC decided to stake everything on the one thing it could do – bring people who traded on inside information to justice.

And unlike the regulators of today, they did not shy away from sending some of those traders to jail.

Baird was immediately struck by the similarities between the insider-trading investigations and the Mafia cases he’d worked on. Like organized crime, the Wall Street suspects prized silence and loyalty over any duty to tell the truth and root out corruption. He assumed that a Goldman, Sachs partner, for example, would go to jail rather than implicate another partner at the firm. Also, as in organized crime investigations, there were numerous interlocking cases, and not enough investigators to pursue all the leads.

Sadly, nothing much changed. The junk-bond mania was followed by the dot-com bubble followed by the credit crisis. And the number of people who were actually punished for financial crimes kept going down. Rinse, repeat.

The Discipline of Market Leaders (Amazon,) is about the importance of focusing on either one of cost, innovation, or service. 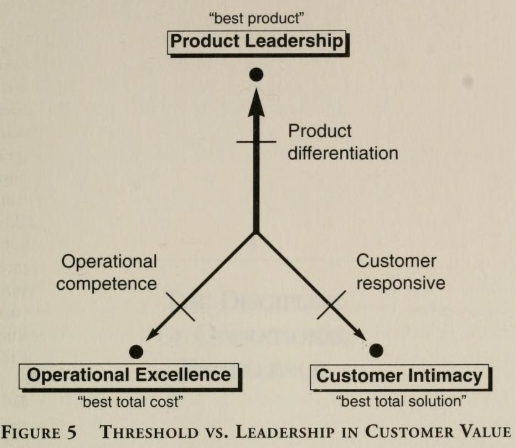 The general message of the book could be useful for investors in old-economy stocks. Figuring out how a company scores along these drivers of value could help in evaluating the robustness of the “moat.” 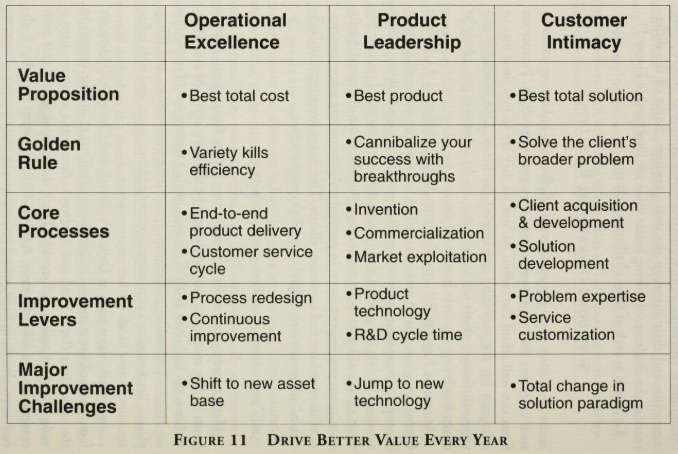 However, things change. Consider this chart from Understanding Abundance: 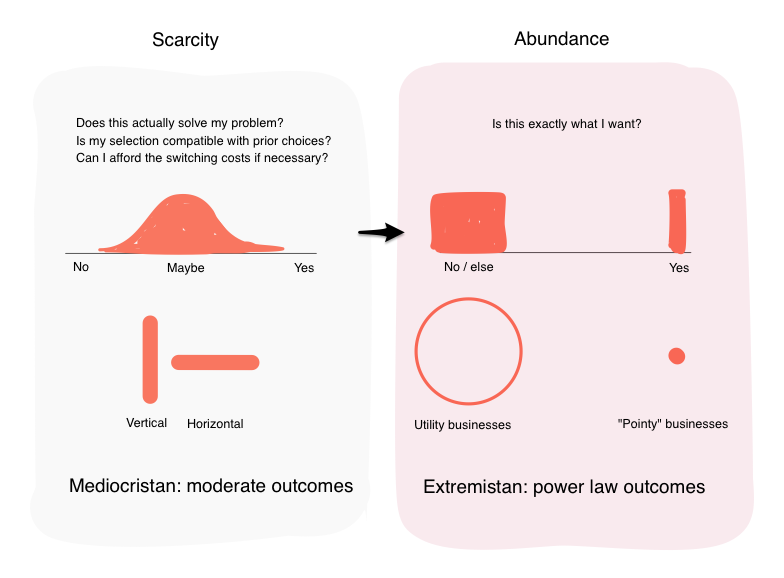 Along with cost/innovation/service, in the age of abundance, companies need to also choose between being a “utility” business or a “pointy” business. The drivers of value have shifted.

All said, the book was published in the late-90’s and hasn’t aged well. The examples are dated and some of the exemplar companies have gone bankrupt.