Holding on to our view is not a behavioral pitfall that plagues investors alone. It’s a fairly common characteristic of all humans. In the last chapter of The Little Book of Behavioral Investing: How not to be your worst enemy, James Montier pointed out the perils of the confirmatory bias. In this chapter, he talks about “conservatism” which in combination with the confirmatory bias becomes deadly for investors. 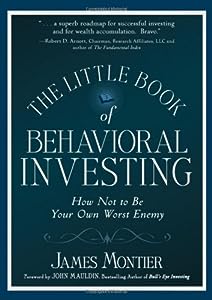 Earlier in Chapter 6, Montier revealed the effect information has on our confidence levels. The more data we get to throw around in our head, the more confident we become of our decisions. However, access to increasing amounts of data does little to improve the accuracy of our final decision. Similarly, investors resist changing their sell or buy decisions once they’ve made up their minds. Even when new evidence comes to fore that implies their earlier decision may be flawed, they tend to under-react, selecting not to change their stand or do it very slowly – a behavioral pattern called “anchoring.”

Conservatism is also why perma-bears usually stay perma-bears for life as do perma-bulls. Anyone who tries to break this mold is subjected to abject torture. Well, not really. But certainly, the act does not get the approval of the respective sacrosanct groups. Why is that? It’s bad enough that we’re not flexible in our decision-making process. Do we also need to pull down those who dare to be different? It’s a truth that reigns across the globe. Sacred wars, hatred killings, road rage, social ostracism – aren’t all these a more extreme form of intolerance for different opinions and practices? But let me not go off on a tangent.

Montier links the attitudes of perma-bears to conservatism. They are always negative about the market and weirdly enough, have nothing to do with money management on the ground. These people are highly paid for their pessimistic discourses and market trend postmortems. They’re respected and ardently followed. What you learn from them is to be afraid. Stay scared, stay safe. And where does that take you in the investor’s world? Not very far from where you started.

The absurdity of investor conservatism was on naked display recently when ex-Merrill, and now Gluskin Sheff’s Chief Economist, David Rosenberg recently got more constructive on the economy and the markets this year. Investors who followed his briefs were mad at him for “abandoning” them. “It was never about his analysis; it was always about him adding intellectual heft to their pessimism and quasi-political partially religious desire for the collapse of the system. Their worldview was that things were in permanent decline and his sophisticated charts added a veneer of respectability to their pre-existing biases,” says Joshua M Brown on StockTwits.

And as David’s rigorous analysis forced him to warm to the possibility of a healthy investing environment, they flipped out and turned on him. They were not mad at him for being wrong, they were mad at him for changing his mind!

Risk is part of this game and if you can’t handle it, you’ve no business here. That’s not to say that you go crazy with your investment portfolio. This means that you be willing to:

How does that work?

Montier believes conservatism is why many investors miss out on vital turning points in the market. Since we don’t like change, we under-react to things that may compel us to revisit our decisions. When the market is unstable, investors hold their breath, waiting for the worst to pass. In the process, they miss precise signals that could get them big returns in time. Remember Chapter 2 – tagging companies worth investing if their price fell? Unstable markets are ripe with such opportunities.

Mistakenly, investors tend to overreact to every trend when the market is stable – a time when it’s best to turn down the noise. It’s a completely skewed strategy.

Beating conservatism is hard, terribly hard. Montier suggests a solution to beat ourselves in the game – start with a fresh slate. Recreate your investment cases based on current research and facts. If companies that figured in your initial plan are missing, it’s best to let them go.

In short, the market doesn’t care about your personal beliefs. And just like how cricket commentary doesn’t change the outcome of a match, pundits don’t make markets. Don’t lose sight of the fact that the goal is to earn a reasonable return on your investment.