Here’s a roundup of analyst ratings for INFY and TATAMOTORS

Inflation slowed less than expected in March, as food and energy prices kept climbing, but a cooling in manufacturing prices kept intact market hopes for a rate cut by the Reserve Bank of India on Tuesday. (SVIZ)

Heavyweights are shorting Spain: John Paulson is shorting European sovereign bonds and buying credit-default swaps on European debt, or protection against the chance of default. Spanish banks are of particular concern as their holdings of the country’s debt and client withdrawals make them overly dependent on European Central Bank financing, Paulson told investors. (Bloomberg)

Bridgewater’s Ray Dalio is not far behind. (BI)

Goldman Sachs: Portugal needs a real devaluation of around 35%, Greece around 30%, Spain 20%, and Italy about 10-15%. But as long as they are in the Euro, its not going to happen. I guess the choice is between civil war and the Euro then? (BBC) 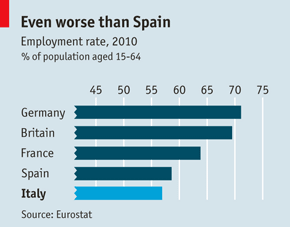 The Economist nails it: Much of current economic policy seems to be driven by the need to prop up banks, whether it is record-low interest rates across the developed world or the recent provision of virtually unlimited liquidity by the once-staid European Central Bank. The long-term effects of these policies, which may be hard to reverse, are difficult to assess. (Economist)

Europe RIP? The sovereign debt crisis has shown that when the going gets tough, few people identify with Europe. The periphery countries might be pushed out of the euro zone by their electorates, sick of the austerity measures that have plunged Greece, Spain and Portugal into deep recessions, or Germany might get tired of having to foot the biggest part of the bill for bailouts and get out. (CNBC)

Italy worse than Spain? Italy’s banks bought more than €50 billion ($65 billion) of government bonds during the winter are perilously exposed to renewed panic in the debt markets. (Economist)

Intense worries about the future of the euro, followed by a dissipation of sovereign debt woes and better economic news. But then the debt crisis flares up just as the economic data start to wobble. Sound familiar? Investors are asking if 2012 is turning into a rerun of 2011. (FT)

If you are interesting in reading more about [stockquote]INFY[/stockquote], you can read the stream here. The NIFTY ended on a negative tone, drifting down -1.39% for the week.

India’s industrial production grew at a slower-than-expected pace (4.1%) in February, weighed down by a contraction in consumer durables and consumer goods. The kicker, however, was the revision in the Jan numbers, from 6.8% to 1.14%! (CNBC)

With New Delhi in a policy meltdown, India’s best hope is that the RBI comes to the rescue. A period of boldly lower rates could encourage businesses to invest more aggressively. Confidence in the business sector might spill over into financial markets, decreasing the risk that the government runs out of money. (Reuters)

The European Central Bank’s €1 trillion lending spree over the winter has stored up a host of fresh problems, leaving parts of the banking system more vulnerable than before as the short-term “sugar rush” nears exhaustion. Credit experts say the Spanish and Italian banks are trapped with large losses on sovereign bonds bought with ECB funds. “The banks are deeply underwater. This is turning into a disaster for the eurozone periphery now that the liquidity tap has been turned off.” (Telegraph)

China Q1 GDP growth cools to 8.1% vs. 8.9% in Q4 (MW) With growth slowing, particularly in the real estate sector, Chinese banks have been a great place to bet against. The country is overbuilt and does not have the internal demand to support its ambitious growth plans – Jim Chanos (CNBC). Property construction was responsible for about 13% of GDP in 2011, and more than a quarter of investment. (FT)

Over the past year, the number of active day traders has fallen by 25-30% due to lack of intra-day trading opportunities on the bourses, prompting the increased use of algorithmic trading. Use of algorithm trading system, downsizing and reducing headcount are some of the measures being taken by the day traders to stay afloat amid unfavorable market conditions. (ET) Europe is back having world-markets like a yo-yo. Yogi Berra would say: “It’s déjà vu all over again.” Spain’s industrial output is sliding at an accelerating rate: output fell 5.1% (y/y) in February, after 4.3% in January and 3.5% in December. Unemployment is at 23.6%. “What is the EU going to do? Send in the army?” (Telegraph)

Satyajit Das: China can’t rescue the world because its recent growth is largely illusion. Its headline growth of 8-10% since 2007-08 has been driven by new lending averaging 30-40% of GDP. Up to 20-25% of these loans may prove to be non-performing, amounting to losses of 6-10% of GDP. If these losses are deducted, Chinese growth is much lower. (Independent)

Stay tuned for this week’s edition of the Technical Analysis Tutorial from Abhishek!