Are we in for an oil shock? Brent crude hit a nine-month high on Friday, breaking through $125 a barrel, up 14% since the start of the year. (Telegraph) Meanwhile, California is counting down t $6 a gallon of gas. To keep the impact of rising fuel prices in perspective, it is said that an increase of every penny in gas prices at the pump sucks $1.5 billion out of US consumers.

In the meantime, the US is undergoing a boom in natural gas. Energy producers are applying new techniques to open new unconventional basins as well as increasing production from existing basins. North Dakota alone is now producing more than 500,000 barrels per day due to new oil shale development and this number is expected to double by 2016. (PIMCO) 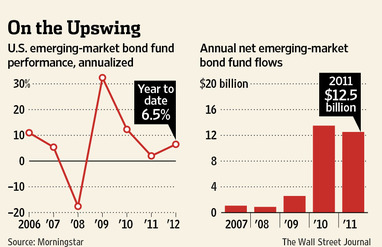 Money is flowing into emerging market debt (WSJ) But that may not be a good thing. India and China, in particular, may be headed towards a financial crisis; at least according to Barclays.

China plans to force government officials to stop buying foreign brands like Volkswagen and Toyota and buy only locally branded cars. Are there any “local” car companies left in India? Don’t think so. (WSJ)